Oitbacka is relatively young as a manor. In the past, the place has belonged, among other places, to the nearby Espoo manor, but got its current form at the end of the 19th century, when the property was bought by the Russian trading family Kiseleff.

The Kiseleff family probably originated from the Yaroslavl Governorate in Russia and came to Finland in the middle of the 18th century. At the beginning of the 19th century, the family took over the Helsinki sugar mill, which would eventually become the family's life's work and source of income.

The mill, which was once founded in the centre of Helsinki, in the current Kiseleff house at the Senate square, had to move out to Töölö bay for fire safety reasons.

The house where the mill operated has now been demolished, but the Finnish National Opera stands in that place today. In addition to the sugar business, Feodor Pantelejevitsch Kiseleff (1772-1847) also worked as a shipowner. This is to be able to import raw sugar from, among other things Cuba, Brazil, and Batavia on Java.

After the death of Feodor Pantelejevitsch Kiseleff, the sugar mill was eventually taken over by sons Nikolai and Feodor, who ran the company under the name F.P Kiseleff & Söner.

In June 1859, MPhil, later the consul and councillor of commerce, Nikolai Kiseleff, bought the property at Lojärvi lake in northern Kyrkslätt. The commercial council already devoted a lot of care and interest to the property, and had the area enlarged, newly built, and beautified. Among these new buildings, Nikolai had the current manor house built in white plastered brick, following drawings by his brother Konstantin, in the years 1866-1876.

Feodor Kiseleff continued in his father's footsteps by enlarging and beautifying the farm. He let i.a. build a large gardener's residence with winter storage space, i.e., an orangery, and a new barn for 96 caged animals. 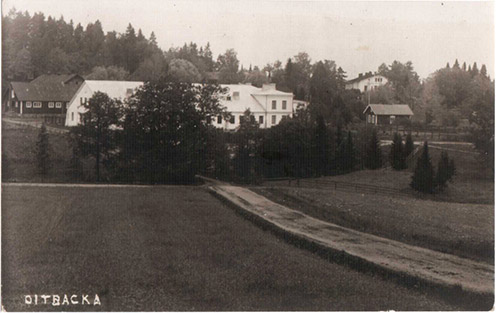 Feodor Kiseleff was particularly interested in horse breeding, and during the years 1910-1912, according to drawings by Jarl Eklund, he had a partially two-story white plasterd riding stable built. The stable housed 15 stalls and 19 boxes as well as a feed barn, saddle rooms and housing for both the coachman and the stable master. During the years 1893-1926, a total of 186 horses were bred by i.e., the Ardennes breed. In addition to breeding, a driving school existed in the years 1899-1909 for the training of domestic coachmen and grooms. 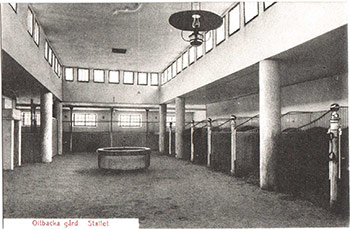 In 1926, the farm passed into the ownership of Guy Topelius. Topelius was the nephew of Consul Kiseleff. After him, Oitbacka was inherited by his widow, Mrs. Anna Topelius, who was the sole owner of the property until 1986. Nowadays, the farm is owned by the Salenius family, who are closely related to Anna Topelius.

The farm today covers approx. 350 ha, of which 90 ha is arable and 230 ha is forest. In addition to conventional agriculture, forestry, apple growing, rental activities and farm tourism are run on the farm.